Pakistan cricket team players were seen wearing black armbands during their match against Australia on Wednesday, June 12 at The Cooper Associates County Ground in Taunton. 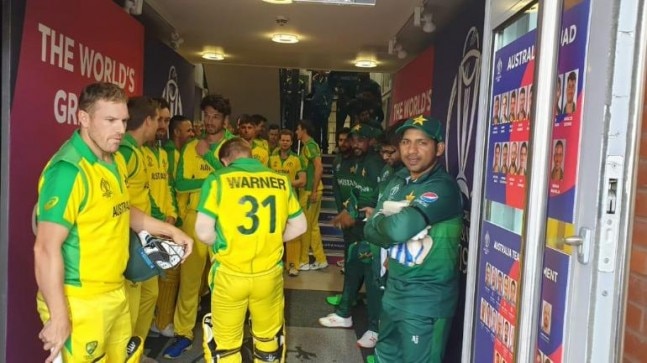 During the toss, Pakistan skipper Sarfaraz Ahmed said: “One of our Test umpires (Riazuddin) has passed away, and in honour of him, we’re all going to wear black bands today.” Previous Test umpire Riazuddin passed on here on Tuesday because of heart failure. He was 60.

Riazuddin additionally administered in 12 One-day Internationals. On November 13, 1990, he made his ODI debut in the game among Pakistan and the West Indies at Multan. He officiated last in the ODI match between Pakistan and England on October 24, 2000 at the National Stadium, Karachi.

However, after two consecutive matches being washed out, finally cricket has returned to England as winning the toss Pakistan opted to bowl first. Both teams were gone for heave pace attack as Australia rested Adam Zampa and brought pacer Kane Richardson in replace of him. While Pakistan also rested their leg spinner Shadab Khan and played Shaheen Shah Afridi which means both the teams were gone for four frontline pacers.

Australia started very well and were in good position to score a bog total. Opener David Warner and Aaron Finch made a partnership of 146 runs before Finch got out scoring 82 runs off 84 balls. Mohammad Amir took his wicket. At the time of writing this report, Australia are on 169-1 in 26 overs with David Warner and Steve Smith at the crease. Warner is batting at 64 runs while Smith is on 8 runs.

Shakib in best T20 XI of all time, Kohli named as captain

No live match currently in Progress!

No completed match yet!

Sachin and Anjali’s partnership has been very special one

Roach names Kallis as toughest batsman he bowled to